As I mentioned in a previous post, Mark Tomlinson’s presentation about insight from TestBash 2013 mad a big impression on me. Not just because of the wonderfully confounding spinning cat, but because of the neurological process of insight which has the potential to give testers like us the potential to see things that others can’t. The principle of un-learning what you know, relaxing your cortex as means of triggering that process is fascinating, and the other day I stumbled across another great example of having to un-learn something in order to overcome a cognitive bias.

This came from a YouTube video on the Smarter Every Day channel with Destin Sandlin and dealing with what was termed a backwards bike.

This was a bike where the head tube (steering column) had been modified so that turning the handlebars LEFT would turn the front wheel RIGHT and vice versa. 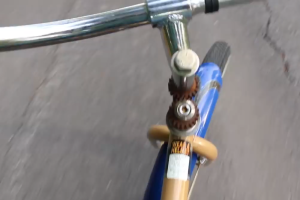 I know what you’re thinking – How hard can it be? Just reverse your thinking! or even better, Don’t turn the handlebars at all, just go straight! Piece of cake! It’s not rocket science, for goodness’ sake.

Well, Sandlin is a rocket scientist and it took him 8 months to learn how to ride the backwards bike, and admittedly even then he still didn’t find it easy. His son on the other hand who was maybe 5 or 6 managed to ride it within 2 weeks.

Much like spinning cat, although most of us could get it to change directions at some point we couldn’t necessarily do it on demand, nor explain what we did to trigger the switch. With the backwards bike you can see that even the slightest distraction as Sandlin was riding it caused him to flip back to his old ways of thinking and wipe out.

As far as testing goes, this illustrates that simply knowing about your bias doesn’t automatically mean you’ll overcome it, but it is a start.